The Food, Drinks and People of The Perfect 10 Gala

All photos by Quy Tran Photography unless otherwise noted. Attendees can view the entire photoset and order prints online. 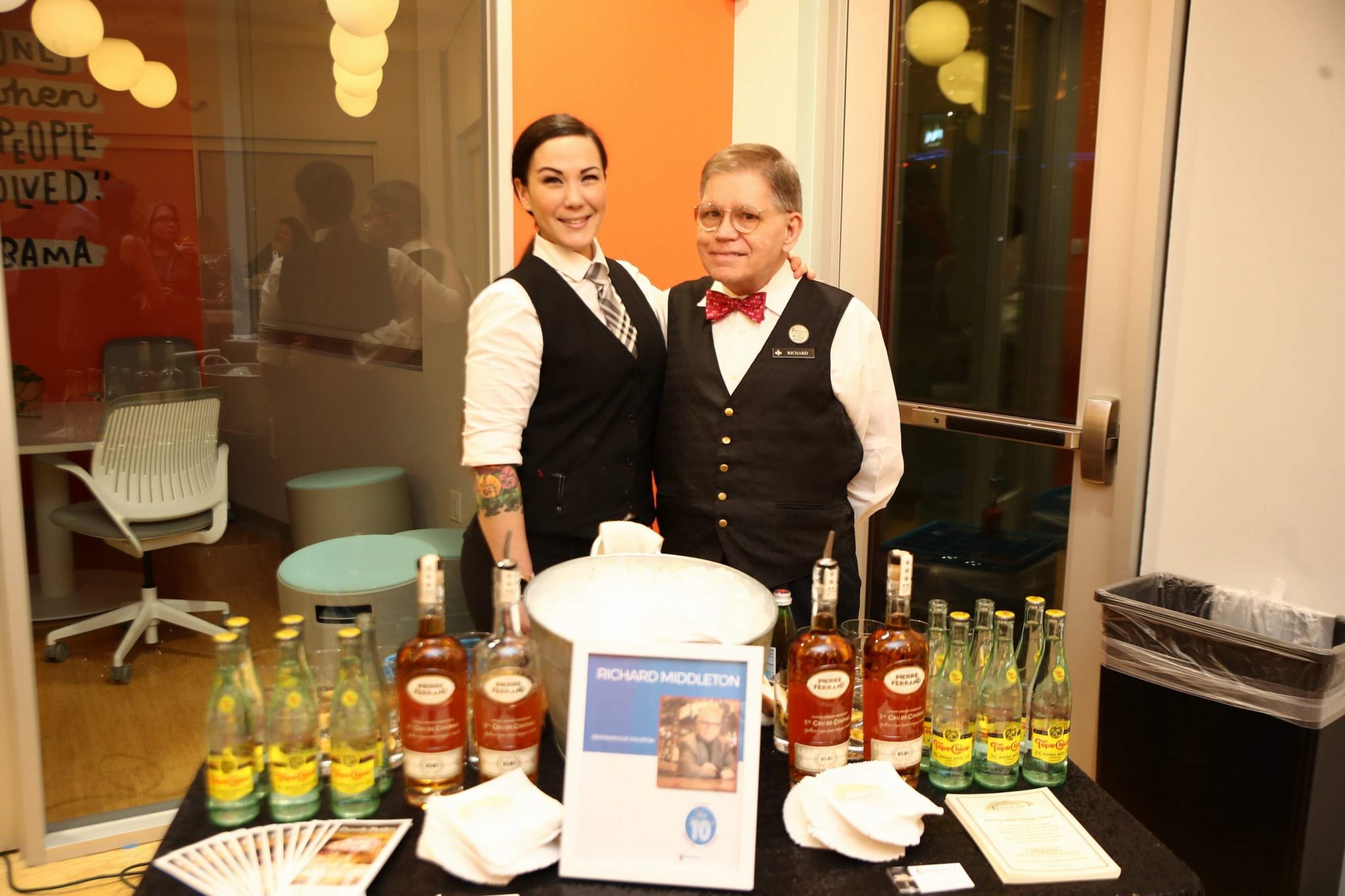 Perfect 10 Gala honoree Cleverley Stone. Photo by Evin Thayer.
The gala honoree was radio-show host and food journalist Cleverley Stone, who founded Houston Restaurant Weeks, which has raised, since it was founded in 2003, over $15 million for the Houston Food Bank. Stone is currently battling cancer and was unable to attend because she was receiving treatment the night of the event. However, honorary event chairs the Cordúa family — chef Michael, wife (and cancer survivor) Lucia and his son and fellow chef David — received an honorary plaque on Stone’s behalf. Michael and Lucia delivered it to Stone at the CBS Radio studio where she hosts her weekly live program, The Cleverley Show. (You can watch a video of the presentation online.) When she’s ready, Stone is also receiving a kimono of her choice from Kimono Zulu.

The skilled professionals and partnering businesses that participated in The Perfect 10 Gala brought the best they had to offer. A consistent comment from attendees was “this is the best food they’d ever had at a gala.” The drinks were also top shelf. Here’s what we ate and drank and the people that contributed to the festivities.

COCKTAIL HOUR
Guests were welcomed at the door by Marc Borel of Rainbow Lodge with Château de Bligny, Grande Réserve Brut Champagne from the Côte des Bar region. The blend of 50% Chardonnay and 50% Pinot Noir expressed a peachy aroma and a hint of lemon that prepared our palate for the feast to come. For an immediate, meaty nibble, gala co-sponsor Perry’s Steakhouse & Grille River Oaks (1997 West Gray) on hand with plenty of its famous Pork Chop Bites.

From there, guests explored the first floor where more small bites and drinks were ready to be sampled. The chefs and eateries provided the appetizers were Lyle Bento, serving Tuna Conserva made from premium Gulf filets from Phoenicia Specialty Foods; Vanessa Lomeli from Habanera & The Guero with Duck Confit Tacos; Alex Au-yeung of Phat Eatery with his award-winning Kerabu Prawns; and Samurai Noodle with Spicy Teriyaki Pork Rice Cups.

There was also craft beer and cider. Lennie Ambrose of Saint Arnold Brewing Company provided the brewers popular seasonal Christmas Ale, a hearty, copper-colored brew perfect for pairing with the rich, sweet and spicy dishes of the season; Original Dry Cider, a refresher that recalls the tartness of Granny Smith apples; and perpetual favorite Fancy Lawnmower, an easygoing Kölsch that pairs beautifully with lighter fish and vegetable dishes.

Austin Eastciders gave guests an opportunity to try a full range of its offerings, including its Super Dry and Watermelon varieties. My personal favorite was the Rosé Cider, which gets its intriguing tart and floral flavor not from wine, but from rose extract and hibiscus.

Hydration is always important, especially at a big food and beverage event and Topo Chico was there to help with dozens of iced-down bottles of its beloved sparkling mineral water.

Attendees who sprung for VIP tickets had access to an exclusive lounge featuring chef Monica Pope of Sparrow Cookshop and her “Date with a Pig and Chermoula” dish featuring pork from Gourmet Ranch, a butcher specializing in custom meat cuts; freshly made crepes from Sean Carroll of Melange Creperie; a cocktail by “bar chef” Richard Middleton of Brennan’s of Houston, which featured Pierre Ferrand cognac; and sommelier Adele Corrigan’s Burgundy wine tasting flight that represented the wine bar she manages, 13 Celsius. The wines were Lucie Thebelement brut Crémant de Bourgogne NV, a sparkling wine; 2016 Domaine Courcel Chardonnay; 2019 Domaine Dupeuble Gamay Beaujolais Nouveau (since the gala did fall on the annual Beaujolais release day, after all); and 2015 Michel Gay “Serpentières” Pinot Noir Savigny-les-Beaun.

THE DINNER
While there was plenty to eat and drink during cocktail hour, a five-course meal — plus dessert — was served to guests on the third floor. The tables were accented by beautiful pink, red and white floral centerpieces by Stefanie Coulter of Houston florist Lily In June. Right before the event, Tasos Katsaounis, owner of Bread Man Baking Co., delivered fresh loaves of crusty wheat and sourdough breads, which diners found nestled in baskets on the table along with and a fennel-pollen compound butter made by Chef Kate McLean (formerly of Tony’s who now co-hosts the Pre-Shift podcast and writes for the Houston Press).

2019 James Beard Award-semifinalist Kaiser Lashkari of Himalaya Restaurant & Catering inspired laughs when he declared he’d accidentally made his popular Chicken Biryani with cannabis. He was, of course, joking. Though, the hearty dish may have had an addictive quality, as at least one guest demanded a to-go box. Complementing the dish’s aromatic spices is challenging. However, sommelier and Public Services Wine & Whisky owner Justin Vann expertly navigated the task by choosing 2016 Llopart Cava Rosé Reserva, made by the second-oldest cava house in Spain. (Those in the trade can contact Victory Wine Group to find out how to add this lovely wine to your list; consumers can find it online or contact one of the area’s better liquor stores.)

Alex Padilla, executive chef of The Original Ninfa’s, crafted the fourth course: a rich yet nuanced Cochinita Pibil served with a plantain cake and creamy red poblano sauce. His pairing partner was Vanessa Treviño Boyd of Lakeside Country Club. As one of the few women sommeliers in Houston, she showcased a female winemaker: Arianna Occhipinti from Italy, who has been in the business since she was 16 and began producing under her own label at 22. Boyd’s wine selection, the 2018 Arianna Occhipinti “SP68” Rosso, was a 70% Frappato and 30% Nero d’ Avola blend that had the structure to stand toe-to-toe with the dish’s lush sauce and seasoning.

Chef Teddy Lopez of Killen’s STQ served the final savory dish: Smoked Beef Tenderloin (provided by to-the-trade supplier Ben E. Keith) and carrots (from DR Delicacy) in a short rib consmmé so compelling that some diners lifted their bowls to sip it. David Cedeño (aka “David Daquiri”) of LocKwood STN at Bravery Chef Hall created the final beverage pairing: Murphy & The Art of Smoke made with Wild Turkey Longbranch and accented with a dehydrated orange slice, the perfect way to cap off the savory courses. The cocktail’s large, clear cubes, which melt slowly so the drink doesn’t become water downed, were made be HTX Ice Co.

THAT SWEET THING AT THE END
Jody Stevens of JodyCakes and Sarah Johnston of Fat Cat Creamery joined forces for dessert. Stevens’ captured the season in her Pear Cardamom Spice Cake with Caramel and Johnston paired it with Coconut Ginger Ice Cream. Both components were so decadent you would never guess they were vegan. Niken Prabanto and David Buehrer of Greenway Coffee Company brewed the coffee we all needed to get home after the four-hour long shindig.

Each guest also received a cookie and voucher for a free crepe from Melange Creperie. These were tucked into origami boxes on the tables made by artist Diana Cook (who also happens to be my daughter).

The Perfect 10 Gala was a grand showcase thanks to all of the heartfelt work of the participants noted above. Very special thanks go to all of the gala volunteers. While there are too many to name, Lisa Hopkins designed and produced the slideshow and signage; Olivia Blair of Maple Leaf Pub recruited and coordinated sponsors; and the overall gala coordination team — Phaedra Cook, Karina Hernandez, Tish Ochoa of Melange Creperie, CJ Dilan of Puerto Rican restaurant Sofrito, Vanessa Lomeli from Habanera & The Guero and Sherri Segari of Lulu & Ruby Concepts — spent weeks making sure everything ran smoothly.